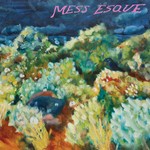 Just in time for the world that's coming are a bewitching new duo from Australia. Featuring music and instruments by Mick Turner and words and voice by Helen Franzmann, Mess Esque's debut album restlessly wanders through a series of intimate dialogues.

Helen lives in Brisbane, Mick in Melbourne. Mick's played guitar for years, collaborating with loads of talented others; he's perhaps best known as one third of Dirty Three.

In 2019, Mick was introduced to Helen through a mutual friend who'd produced the last McKisko album, the name Helen has worked under over the past 12 years, making records, and touring regularly. With a plan to get together and make a record, they sent ideas back and forth - but when everything else happened instead, they continued to collaborate from a distance. In mutual isolation, a true correspondence took flight, electrifying in the air between them.