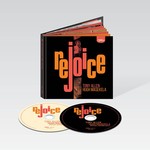 'Rejoice' is the classic collaboration between Tony Allen, the legendary drummer and co-founder of Afrobeat, and Hugh Masekela, the master trumpet player of South African jazz. The record, released to great acclaim in March 2020, became the first posthumous release from Masekela, and the last release from Allen, who sadly passed away a month later.

For this Special Edition, World Circuit have gone back to the original 2010 mixes and added previously unheard parts from the 2019 sessions to create 8 reimagined bonus mixes, accompanied by a new booklet with sleeve notes and photos.