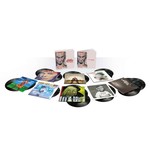 The latest in an award-winning and critically acclaimed series of box sets, Brilliant Adventure (1992 - 2001) includes newly remastered versions of some of Bowie's most underrated and experimental material: Black Tie White Noise (1993), The Buddha of Suburbia (1993), Outside (1995), Earthling (1997) and Hours (1999), along with the expanded live album BBC Radio Theatre London, June 27, 2000, the non-album / alternative version / B-sides and soundtrack music compilation Re:Call 5 and the legendary previously unreleased album Toy.

Toy was recorded following David's triumphant Glastonbury 2000 performance. Bowie entered the studio with his band to record new interpretations of songs he'd first recorded from 1964-1971. Unfortunately, in 2001 the concept of the 'surprise drop' album release and the technology to support it were still quite a few years off, making it impossible to release. Exclusive to the box set are BBC Radio Theatre London, June 27, 2000 and Re:Call 5. The former was recorded two days after the famous Glastonbury performance in front of 500 lucky fans at the BBC's art deco theatre in central London. RE:CALL 5 features 39 non-album / alternative version / B-sides and soundtrack songs.

The accompanying books will feature rarely seen and previously unpublished photos by photographers including Frank W. Ockenfels 3, Nick Knight, John Scarisbrick and Nina Schultz Terner and others, as well as memorabilia, technical notes about the albums from producers/engineers Brian Eno, Nile Rodgers, Reeves Gabrels and Mark Plati as well as a new an interview with The Buddha of Suburbia collaborator Erdal Kizilçay.

The Buddha Of Suburbia (remastered)
A1. Buddha of Suburbia
A2. Sex and the Church
A3. South Horizon
B1. The Mysteries
B2. Bleed Like a Craze, Dad
C1. Strangers When We Meet
C2. Dead Against It
C3. Untitled No. 1
D1. Ian Fish, U.K. Heir
D2. Buddha of Suburbia (featuring Lenny Kravitz on guitar)

1. Outside (remastered)
A1. Leon Takes Us Outside
A2. Outside
A3. The Hearts Filthy Lesson
A4. A Small Plot of Land
B1. Baby Grace (A Horrid Cassette)" (segue)
B2. Hallo Spaceboy
B3. The Motel
B4. I Have Not Been to Oxford Town
C1. No Control
C2. Algeria Touchshriek (segue)
C3. The Voyeur of Utter Destruction (as Beauty)
C4. Ramona A. Stone/I Am with Name (segue)
C5. Wishful Beginnings
D1. We Prick You
D2. Nathan Adler (segue)
D3. I'm Deranged
D4. Thru' These Architects Eyes
D5. Nathan Adler (segue)
D6. Strangers When We Meet

Earthling (remastered)
A1. Little Wonder
A2. Looking for Satellites
A3. Battle for Britain (The Letter)
B1. Seven Years in Tibet
B2. Dead Man Walking
B3. Telling Lies
C1. The Last Thing You Should Do
C2. I'm Afraid of Americans
C3. Law (Earthlings on Fire)
D. [Etching]

'hours…' (remastered)
A1. Thursday's Child
A2. Something in the Air
A3. Survive
A4. If I'm Dreaming My Life
B1. Seven
B2. What's Really Happening?
B3. The Pretty Things Are Going to Hell
B4. New Angels of Promise
B5. Brilliant Adventure
B6. The Dreamers

Toy (previously unreleased)
A1. I Dig Everything
A2. You've Got A Habit Of Leaving
A3. The London Boys
A4. Karma Man
B1. Conversation Piece
B2. Shadow Man
B3. Let Me Sleep Beside You
B4. Hole In The Ground
C1. Baby Loves That Way
C2. Can't Help Thinking About Me
C3. Silly Boy Blue
C4. Toy (Your Turn To Drive)
D. [Etching]