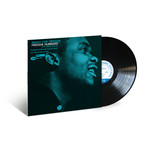 The Indianapolis-born trumpeter Freddie Hubbard introduced his prodigious talent on Blue Note Records with a run of remarkable albums recorded thru the early 1960s. At first rooted firmly in hard bop, Hubbard began to broaden his approach on his masterwork Ready for Freddie, recorded in August 1961. "The way in which I'm most interested in going is Coltrane-like," Hubbard told liner note writer Nat Hentoff. Hubbard had recorded with Coltrane earlier in the year on the saxophonist's Atlantic album Olé Coltrane and Africa/Brass for Impulse. Hubbard further explained, "I mean different ways of playing the changes so that you get a wider play of colors." To paint with those colors Hubbard assembled a band that included three musicians from Coltrane's orbit: bassist Art Davis, pianist McCoy Tyner, and drummer Elvin Jones.

The date also marked the first collaboration between Hubbard and Wayne Shorter, a startlingly original saxophonist and Hubbard's soon-to-be bandmate in The Jazz Messengers when the trumpeter replaced Lee Morgan in Art Blakey's flagship band later that year on seminal Blue Note albums including Mosaic and Buhaina's Delight. Rounding out the unique sextet on Ready for Freddie is Bernard McKinney on euphonium, a mellow-toned brass instrument that enhanced the ensemble's tonal palette. The album opens with Hubbard's sprightly tune "Arietis," a nod to his astrological sign Aries, before down-shifting into the sublime ballad "Weaver of Dreams," a stunning performance by Hubbard where both his brilliant tone and awe-inspiring technical command of his horn are on full display. Following Shorter's jaunty tune "Marie Antoinette," the band pays homage to Charlie Parker with Hubbard's fleet-footed tune "Birdlike." The album comes to a close with the expansive and explosive "Crisis," a Hubbard original that sought to capture some of the simmering tensions of the early-1960s.

This Blue Note Classic Vinyl Edition is all-analog, mastered by Kevin Gray from the original master tapes, and pressed on 180g vinyl at Optimal.

A1: Arietis
A2: Weaver Of Dreams
A3: Marie Antoinette