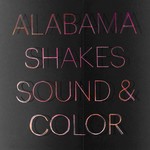 Deluxe edition of the ground-breaking, genre-defying second album by Alabama Shakes. Originally released in April 2015, Sound & Color debuted at No. 1 on the Billboard 200.