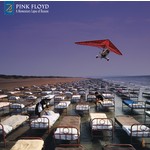 This iconic album has been remixed and updated from the original 1987 master tapes by Andy Jackson with David Gilmour.

The release of The Later Years project in 2019 gave an opportunity for a fresh overview of A Momentary Lapse Of Reason, the band's first album since the departure of Roger Waters. By returning to some of Richard Wright's original keyboard outtakes, and by re-recording new drum tracks with Nick Mason, producers David Gilmour and Bob Ezrin have restored a better creative balance between the three Pink Floyd members. The remixed and updated 'A Momentary Lapse of Reason' album also features a new album cover using an alternative photo by Robert Dowling from the original album cover shoot directed by the late Storm Thorgerson.