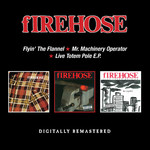 FIREHOSE (as the band's name is stylized) was formed in 1986 by Mike Watt, George Hurley and Ed Crawford, after the death of guitarist/vocalist D. Boon brought an end to Watt and Hurley's previous band, Minutemen.

The band split in 1994, but got back together in 2012 and have continued to gig on and off since then.

Down With The Bass
Up Finnegan's Ladder
Can't Believe
Walking The Cow
Flyin' The Flannel
Epoxy, For Example
O'er The Town Of Pedro
Too Long
The First Cuss
Anti-Misogyny Maneuver
Toolin'
Song For Dave Alvin
Tien An Man Dream Again
Lost Colors
Towin' The Line
Losers, Boozers And Heroes