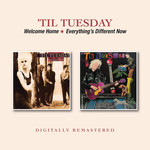 The group had instant success with their debut album 'Voices Carry' and the single of the same name.

Both these albums made the US Top 200, with the hit singles 'What About Love', 'Coming Up Close' and '(Believed You Were) Lucky' on this package.

The band split up in 1988 after the release of 'Everything's Different Now.

Aimee Mann continues to this day to have a successful recording career.

Digitally remastered and slipcased and with new notes/

Everything's Different Now
Rip In Heaven
Why Must I
J For Jules
(Believed You Were) Lucky
Limits To Love
Long Gone (Buddy)
The Other End (Of The Telescope)
Crash And Burn
How Can You Give Up?