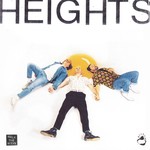 This is Walk the Moon's first studio album recorded since bassist Kevin Ray left the band in December 2020.

In frontman Nicholas Petricca's words, "the album is buttressed by songs that are eight or nine years old, and that the band writes a lot of songs for each record, so there's a lot of material that doesn't get used, and it's not because we don't love those babies. Sometimes it takes a while for them to grow up, or for us to find the right way to really bring them to life." It sports a more optimistic sound, similar to the band's earlier works.