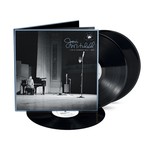 Vinyl breakout from the Joni Mitchell Archives Vol. 2 collection exploring the period leading up to the release of Blue in 1971.

This 3LP set features Mitchell's complete Carnegie Hall debut, recorded on 1st February 1969, a few months before the release of her second album, Clouds, which would win Mitchell her first of nine Grammy Awards.

A1. Chelsea Morning
A2. A Valentine for Joni
A3. Cactus Tree
A4. Night in the City
A5. I Had a King
B1. Blue Boy
B2. My American Skirt
B3. The Fiddle and the Drum
B4. Spoony's Wonderful Adventure
B5. That Song About the Midway
B6. Both Sides Now
C1. Marcie
C2. Nathan La Franeer
C3. Intro to The Gallery
C4. The Gallery
C5. Hunter
C6. Morning Morgantown
D1. Intro To Get Together
D2. Get Together
D3. Intro to The Circle Game / Little Green
D4. Medley: The Circle Game / Little Green
E1. Michael from Mountain
E2. Into to Urge For Going
E3. Urge for Going