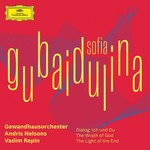 A Tribute to the Pioneering Contemporary Composer on Her 90th Birthday.

Entitled simply Sofia Gubaidulina, DG's new album features performances directed by a conductor with whom Gubaidulina has forged a hugely productive relationship in recent years: Andris Nelsons. Together, he and the Leipzig Gewandhausorchester present her latest violin concerto, Dialog: Ich und Du (2018), with soloist Vadim Repin, and the orchestral works The Wrath of God (2019) and The Light of the End (2003). The album honours the remarkable achievements of a composer whose creative powers show no sign of waning.

"It is a great privilege to record these works by Sofia Gubaidulina, whose strength, artistry and genius are reflected in the intense spiritual depth of her music, and its visionary sound world," comments Andris Nelsons. "Conducting the world premiere of the Triple Concerto with the Boston Symphony Orchestra in 2017 was an unforgettable experience. It has, therefore, been a particular honour to welcome Sofia Gubaidulina as the Gewandhausorchester's composer-in-residence in Leipzig for three seasons from 2020/2021 onwards. The Gewandhausorchester and I have embraced the journeys her works have offered us throughout the past seasons, and I am thrilled that Deutsche Grammophon's album showcases three pieces that allow her extraordinary wisdom to be shared with every listener. We wish Sofia Gubaidulina a happy 90th birthday and look forward to experiencing many more masterworks in the future."

Sofia Gubaidulina opens with the composer's third violin concerto, Dialog: Ich und Du, inspired by the work of philosopher Martin Buber (1878-1965). Like her previous two works in the genre, the concerto was written with a specific musician in mind and reflects what The New Yorker has called "her precise and exploratory knowledge of the technical possibilities of instruments". Its dedicatee Vadim Repin was soloist in the work's first performance in April 2018 and gave its German premiere at the Gewandhaus in December 2019, when the present recording was made.
Composed in parallel with the concerto and premiered in Vienna in November 2020,

Gubaidulina's latest orchestral work, The Wrath of God, is a powerful and dramatic piece for huge forces. As further evidence of both her undimmed creativity and her fruitful relationship with Andris Nelsons, the composer is currently expanding her original score to create a two-part homage to Beethoven for the conductor's two orchestras: the Gewandhausorchester and the Boston Symphony Orchestra.

There is more drama in the final work on the album, The Light of the End, it too written for the Boston Symphony Orchestra, and first performed by them in 2003. The sense of conflict created throughout the piece - by the use of dissonance, dark colours and the clash between "natural" and "tempered" tuning - finds some resolution in the final section, where the light-filled sounds of antique cymbals are heard.

Born in the Tatar Autonomous Soviet Socialist Republic, Sofia Gubaidulina began music lessons at the age of five and wrote her first composition eight years later, before studying in Kazan and at the Moscow Conservatory. Although the head of the latter's examination panel declared that her attempt to write a symphony was "on the wrong path", another of its members, Dmitri Shostakovich, subsequently advised her not to deviate from that path. While earning a living as a film composer, she simultaneously developed a distinctive personal language in her concert works which, by expressing her Christian faith, often clashed with the artistic dictates of the Soviet system.

Deutsche Grammophon helped secure Gubaidulina's reputation beyond the Soviet Union in 1989 with the release of Offertorium, her first violin concerto, recorded by Gidon Kremer, for whom it was written. The label subsequently recorded her Viola Concerto and second violin concerto, In tempus praesens, the latter with its dedicatee Anne-Sophie Mutter as soloist.

"Full marks to Deutsche Grammophon for standing alone among the bigname companies in documenting one of the most important musical voices of our age." BBC Music

"Nelsons is the guiding spirit in what is surely, listened to in order, one of the most remarkable musical and spiritual journeys ever conceived." Gramophone Editor's Choice December 2021

"Indeed, the works on this disc are resplendent. The performances, too, are all one could ask and recorded with state-of-the art sound. Although it is very early in the year, I suspect this will rank high on my list of favourite recordings reviewed in 2022." MusicWeb Recommended

Dialog: Ich und Du
The Light of the End
The Wrath of God