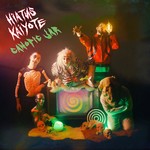 Singer Nai Palm is a long-time lover of Halloween inspired music, as she explains in the song's meaning:

A canopic jar is an ancient artifact from Egypt. When they preserved the body through mummification for the afterlife, the organs were contained in a canopic jar. I used this image of preserving something in this lifetime to be accessed in another as a metaphor for an unobtainable relationship, to re-appear throughout the ages because circumstances won't allow it this time around.

Side A:
Journey To The Crystal Tomb
Canopic Jar