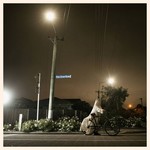 French For Rabbits
The Overflow (LP)

The group, led by Brooke Singer, weaves dark and anthemic tunes around folk-pop hooks - with layers of detail that make for an absorbing listen.

Brooke says, 'the creation of our third album was very creatively freeing and intuitive. I really love what we've made. It's my favourite record of ours. I think we found a middle ground between the complexity and nuance we love, and some more immediately accessible, big honest feelings.'

The Overflow was recorded by Jol Mulholland (Delaney Davidson, Neil Finn, Troy Kingi) at the The Lab in Auckland and The Surgery in Wellington, and produced by Brooke Singer, Jol Mulholland and French for Rabbits.