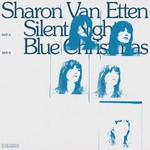 Van Etten's rendition of "Silent Night" is broody and minimalistic, emphasizing her muscular voice over droning synth. It was recorded in 2018 for the "The Letter," a short film by Eric Paschal Johnson that received a Vimeo Staff Pick Award.

In Van Etten's cover of the holiday classic "Blue Christmas," her voice prettily mulls over lulling, simplistic guitar. It originally appeared on a benefit album called Do You EAR what I Ear in 2009 for the Association to Benefit Children, an outstanding New York-based service dedicated to permanently breaking the cycles of abuse, neglect, sickness and homelessness among disadvantaged children and their families.

A. Silent Night
B. Blue Christmas