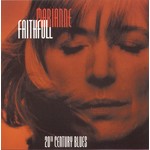 As the liner notes to this intriguing release tell, Faithfull had a long-simmering interest in German cabaret, particularly the work of Kurt Weill. It came fully to life via her role as Pirate Jenny in a staging of The Threepenny Opera in Dublin as translated by Frank McGuinness and her attendance at a workshop organized by Allen Ginsburg. After a series of initial performances with pianist Paul Trueblood, Faithfull took her revue of many classic songs from the mid-century, titled "An Evening in the Weimar Republic," to the road.

This particular recording is from a performance in Paris in 1996, showcasing both a smart selection of songs to work with and Faithfull's own dramatic, interpretive skills with them.