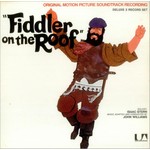 Though little known at the time outside of Israel, his country of origin, where he already was one of the most popular actors, Topol was signed to star as Tevye in the 1967 London stage production of the Sheldon Harnick-Jerry Bock musical, Fiddler On The Roof, a role he already had played in Tel Aviv. The show opened at Her Majesty's Theatre on February 16th to rave reviews, and enjoyed a run of 2,030 performances. Topol's performance led movie director Norman Jewison to cast him in the film version, for which he won an Academy Award®, ensuring his popularity worldwide. He eventually came to the U.S. where he appeared in a revival of the show.