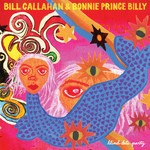 The Blind Date Party hosted by Bill Callahan and Bonnie 'Prince' Billy and featuring AZITA, Matt Sweeney, Alasdair Roberts, Matt Kinsey, Sean O'Hagan, Bill MacKay, George Xylouris, Dead Rider, David Pajo, Mick Turner, Meg Baird, Ty Segall, Emmett Kelly, Cory Hanson, Six Organs of Admittance, David Grubbs, Cassie Berman, Cooper Crain and Sir Richard Bishop happened online in the fall and winter of '20-'21 - but party planning began in the spring of 2020, when, stuck at home, with no gigs in the foreseeable future, Bill, Bonny and Drag City needed an outreach program to keep themselves busy/sane/solvent. In the absence of everything else, playing songs they loved was a good idea; playing with people they loved, a great desire. And making it fun by pairing someone with someone else with no say in the matter - the essence of the blind date - was the plan. Favourite songs were chosen; players from around the Drag City galaxy messaged. Pretty soon, songs began to fly through the air! And thus, they were entertained throughout the summer of 2020, when so much else in the world seemed so completely wrong.

In the fall, the finished work started to appear online: Bill and Bonny singing a song by someone they loved and admired; each song cut by another artist they loved and admired and sent to Bill and Bonny for finishing touches. The spotlight pointed in every direction each week: toward the singers and writers who'd originally played the songs (Yusuf Islam, Hank Williams Jr., Dave Rich, The Other Years, Billie Eilish, Steely Dan, Lou Reed, Bill Callahan, Jerry Jeff Walker, Robert Wyatt, Judy Mayhan, Johnnie Frierson, Demis Roussos, Will Oldham, Leonard Cohen, David Berman, Iggy Pop and John Prine), the featured collaborators, the artists whose work adorned each digital single and videos made by still more collaborators. Now it was a party!