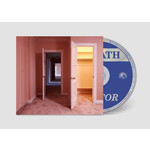 Empath's second studio album and their first for Fat Possum. Visitor was produced and mixed by Jake Portrait (Unknown Mortal Orchestra). On Visitor, Empath sought to one-up the range of sounds heard on their previous album.

During what he calls West Philly Christmas (the week undergrads at UPenn move out and leave piles of high-quality garbage out on the street), Randall Coon recovered a suitcase organ with a sound bank from a Jamiroquai record pre-set on it, which he later played on the album, in addition to running samples on Ableton and acquiring a brand new synth; Jem Shanahan, who plays a '90s children's keyboard, had Portrait filter it in such a way that it sounded "less childlike"; Catherine Elicson's vocals, buried deep in the mix on Active Listening: Night on Earth, take centre stage; and Garrett Koloski's drums are as capacious as they might be in a live set.