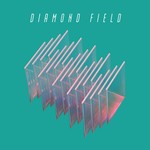 Diamond Field is the creation New York City-based New Zealander Andy Diamond aka Andrew B. White who has spent the last decade working on musical projects with a number of artists. Many of these artists return the favor and appear as guests on the debut Diamond Field album. After a string of single releases over the last few years, the album builds on the strong '80s-influenced sound that Diamond Field is known for.

The album features a strong New Zealand connection featuring appearances from Wellington artist/producer Nik Brinkman (Junica, Over The Atlantic, Physical), Auckland's Belinda Bradley (Selon Recliner), and several ex-pat New Zealand artists. These include Pennsylvania-based Miriam Clancy who co-writes and provides vocals on 'Glowing In The Dark' (White played live bass for the US release of Clancy's 2019 album "Astronomy") and LA-based multi-instrumentalist Rodger Cunningham. Cunningham was a finalist at the 2006 NZ Music Awards for "Best Mana Māori Album" and has written for film and TV, as well as playing with White in Rotorua bands back in the early 1990s. Completing the NZ connection is Melbourne-based vocalist Matthew J. Ruys (Fuemana, Houseparty, Strawpeople) who contributes lead vocals on two of the album's tracks, along with dollops of backing vocals throughout. Ruys also co-wrote and appeared on Diamond Field's second single 'This City' in 2015.

"It is easy to parody Eighties synth-pop (all that emotional dislocation) or turn it into kitsch but that's not what's happening here: this is a respectful and knowledgable tribute to the genre courtesy of original songs (in the style, but stand-alone items) and tracks like Spills Like Love (with Cody Carpenter) are just terrific dancefloor fillers in their own right. Check It's Your Time with Becca Starr and Used to Be with Chelsea Nenni." - Graham Reid, Elsewhere