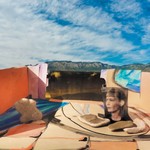 Jenny Hval is an Oslo-based musician, composer, and writer. Multidisciplinary and transgressive are words often employed to describe her art, but Jenny Hval's polyphonic artistry is in fact seamlessly interwoven between musical, literary, visual, and performative modes of expression. She has released several solo albums and novels, including 2018's Paradise Rot and 2020's Girls Against God, both published via Verso Books.

Classic Objects is a map of places: past places, like the old empty Melbourne pubs Hval's band used to play in; public places Hval missed throughout lockdown; imagined, future places, and impossible places where dreams, hallucinations, death, and art can take you. It is interested in combining heavenly things and plain things.

Classic Objects is Hval's version of a pop album. Every song has a verse and a chorus. There are interchangeable moments of complexity, interesting melodies throughout, and a feeling of elevation and clarity in the choruses. Heba Kadry mixed it to sound as though it's played through "a stereo in a mysterious room".

1. Year of Love
2. American Coffee
3. Classic Objects
4. Cemetery of Splendour
5. Year of Sky
6. Jupiter
7. Freedom
8. The Revolution Will Not Be Owned