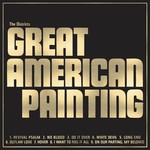 Great American Painting is the rare album that shines a bright light on all that's wrong in the world but somehow still channels a galvanizing sense of hope. With equal parts nuanced observation and raw outpouring of feeling, the Philadelphia-based band confront a constellation of problems eroding the American ideal (gentrification, gun violence, the crushing weight of late capitalism), ornamenting every track with their explosive yet elegant breed of indie-rock/post-punk. Threading that commentary with intense self-reflection, Great American Painting ultimately fulfils a mission The Districts first embraced upon forming as teenagers in small-town Pennsylvania: an urge to create undeniably cathartic music that obliterates hopelessness and invites their audience along in dreaming up a far better future.

Mostly made up of songs sketched by singer/guitarist Rob Grote while living in a cabin in Washington state at the height of the pandemic, Great American Painting marks a significant departure from 2020's acclaimed You Know I'm Not Going Anywhere. "The last album almost felt like a recording project of my own rather than a band affair, so from the start the goal was to focus on what's always worked well with us: an element of simplicity that's still very powerful, with a lot of visceral rock-and-roll energy to it," says Grote. To that end, Great American Painting endlessly spotlights The Districts' greatest assets-the sharply detailed and prismatic tones of guitarist Pat Cassidy, the complex yet combustible rhythms of drummer Braden Lawrence and former bassist Connor Jacobus, who has since amicably departed the band (Lawrence will switch to bass in the band's live show)-while introducing a new subtlety into their sound.