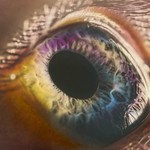 With an album already written, Arcade Fire started recording in February, 2020, but were interrupted by the start of the pandemic. Win & Régine spent the rest of that year and most of the next writing even more songs.

So much happened between early 2020 and mid-2021, when all six band members were able to reconvene at the Sonic Ranch studio, in El Paso: lockdowns, an election, global protest and turmoil, and more.

WE's songs reflect the experiences of the past two years, with Side "I" channeling the fear and loneliness of isolation and Side "WE" expressing the joy and power of reconnection.

These are songs that speak to this moment with unique directness: they have been written, recorded, and released during a critical historical juncture. But they also spring from other sources. The album's first two tracks, "Age of Anxiety I" and "Age of Anxiety II (Rabbit Hole)," draw on "I Am Waiting," a poem by Lawrence Ferlinghetti that Butler has been thinking about for decades. Its first half then concludes with the four-part suite, "End of the Empire I-IV," which conjures vivid images of an emotionally depleted America in which we retreat inside ourselves.

WE is a cathartic experience, a study in contrasts, and a journey from darkness into light.