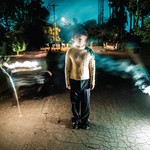 Formed of eleven new songs and released via Phoebe Bridgers' Saddest Factory Records, Nervous At Night is, of course, led by Hickey's remarkable voice, a voice that, like the best pop artists, holds the brave balance of singing fearlessly about your fears.

Across the album, he lays out those fears, frustrations, and faith in friendships in richly detailed ways. While Hickey calls the album a pop record, he admits that sonically it moves in many directions, an amalgamation of his love for folk singers of yesteryear and more contemporary peers, from Taylor Swift and The 1975, to Elliott Smith, to Conor Oberst. Like those heroes, Hickey shares a clarity in his songs that is specific in its songwriting but still inviting, open and generous.

Nervous At Night comes alive in its juxtapositions, chronicling the constant push and pull of life, both its stagnancy and motion in refreshing and honest ways. Chiefly though, this is an album about connection, how even through those struggles we rely on the people around us to keep moving forwards. "I'd like to write songs that are for everyone, that let people into my inner world while also hopefully making people feel less alone on their own. I hope that these songs can be there for somebody the way my favourite songs have been for me."

A1. Dandelions
A2. Gold Line
A3. Mid Air
A4. Thirteen
A5. Missing Years
A6. Every Time I Think
B1. Nervous At Night
B2. Springbreaker
B3. Choir Song (I Feel Dumb)
B4. Month of September
B5. Planet With Water