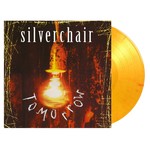 Australian rock band Silverchair released their debut EP Tomorrow in 1994, after winning a radio contest on Triple J. The extended play already became the band's big breakthrough. Its title single reached #1 on the Australian Single Chart and remained there for six consecutive weeks. After re-recording the songs, the band also started to book major successes internationally. The EP was certified 4-times Platinum, received an award for Single Of The Year and Highest Selling Single at the ARIA Music Awards in 1995, where Silverchair also went home with the award for Breakthrough Artist.