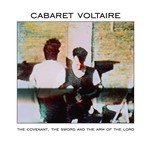 $70.00 In stock with supplier
ETA: 2-5 business days add to cart more by this artist

Cabaret Voltaire
The Covenant, The Sword And The Arm Of The Lord (Limited LP)

Cabaret Voltaire's 'The Covenant, The Sword and The Arm of The Lord', as originally remastered in 2013, now reissued on limited white vinyl.

Known for being the harder, more experimental album of their "Pop" period, 'The Covenant, The Sword and The Arm of The Lord' was originally released in 1985 and includes the classic 'I Want You'. The album embodies Cabarets Voltaire's industrial electro-funk sound and their punk ethos, lending its title to American political extremism.

This release was agreed with Richard H Kirk prior to his untimely passing and was expected to be available soon after the Shadow of Fear releases had finished. Due to vinyl pressing delays, it is being released now.