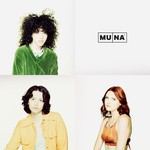 MUNA is magic. What other band could have stamped the forsaken year of 2021 with spangles and pom-poms, could have made you sing (and maybe even believe) that "Life's so fun, life's so fun", during what may well have been the most uneasy stretch of your life? "Silk Chiffon", MUNA's instant-classic cult smash, featuring the band's new label head Phoebe Bridgers, hit the grey skies of the pandemic's year-and-a-half mark like a double rainbow. Since MUNA - lead singer/songwriter Katie Gavin, guitarist/producer Naomi McPherson, guitarist Josette Maskin - began making music together in college, at USC, they'd always embraced pain as a bedrock of longing, a part of growing up, and an inherent factor of marginalized experience: the band's members belong to queer and minority communities and play for these fellow-travellers above all. But sometimes, for MUNA, after nearly a decade of friendship and a long stretch of pandemic-induced self-reckoning, the most radical note possible is that of bliss.

MUNA, the band's self-titled third album, is a landmark - the forceful, deliberate, dimensional output of a band who has nothing to prove to anyone except themselves. The synth on "What I Want" scintillates like a Robyn dance-floor anthem; "Anything But Me", galloping in 12/8, gives off Shania Twain in eighties neon; "Kind of Girl", with its soaring, plaintive The Chicks chorus, begs to be sung at max volume with your best friends. It's marked by a newfound creative assurance and technical ability, both in terms of McPherson and Maskin's arrangements and production as well as Gavin's songwriting, which is as propulsive as ever, but here opens up into new moments of perspective and grace. Here, more than ever, MUNA musters their unique powers to break through the existential muck and transport you, suddenly, into a room where everything is possible - a place where the disco ball's never stopped throwing sparkles on the walls, where you can sweat and cry and lie down on the floor and make out with whoever, where vulnerability in the presence of those who love you can make you feel momentarily bulletproof, and self-consciousness only sharpens the swell of joy.