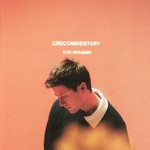 (Un)commentary is the sophomore album from acclaimed singer-songwriter Alec Benjamin. It features 13 tracks, including the previously released "The Way You Felt", "Older", and "Shadow Of Mine".