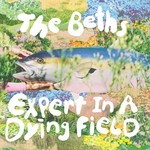 On The Beths' third studio album, Expert In A Dying Field, Elizabeth Stokes' songwriting places her somewhere between being a novelist and a documentarian. The songs are autobiographical, but they're also character sketches of relationships and, more importantly, their aftermaths. The question that hangs in the air: What do you do with how intimately versed you've become in a person once they're gone from your life? 'How does it feel to be an expert in a dying field? How do you know it's over when you can't let go?' Stokes asks on the album's title track. 'Love is learned over time 'til you're an expert in a dying field.'

Filled with acutely cut-to-the-bone lyrics and playfully chaotic, hook-filled melodies, Expert In A Dying Field contains 12 tight, guitar-heavy songs that worm their way into your head - an incandescent collision of powerpop and skuzz.

The single 'Silence Is Golden' foreshadows an album that stands to solidify The Beths' reputation as masters of their craft. With a healthy dose of unabashed expression, and the unwaveringly direct and insightful lyricism we have come to expect from the band, the song elucidates one of the core realities of what it is to be human - that sometimes, all we want is to escape our own minds. "How are you not hearing it? The sound, I'd burn the city to the ground just to turn it down," lead singer Liz Stokes croons over the rich, guitar layered and often chaotic instrumentation.