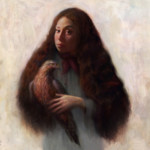 The album contains nine waiata written and sung entirely in te reo Māori, each delivering their own poignant message of love, peace, healing and hope, while collectively serving as a tribute to Theia's tūpuna wāhine (female ancestors) and her beloved haukāinga (home) in the Waikato, as well as the principles of Te Ao Māori.

Te Kaahu O Rangi is an immersive experience, in which Theia's ethereal and dreamy vocals take centre stage, wrapped in a warm nostalgic sound that serves as a nod to a bygone era. Using kupu whakarite (metaphor), pepeha (sayings) and whakataukī (proverbs), Theia weaves together a magical tapestry of lyricism and sound. 'These songs are steeped in the sounds of yesteryear - sounds that I know my grandmothers would've danced to, cried to, and loved,' says Theia. 'I am so grateful that I can now present this album as a taonga tuku iho - a treasure to be cherished and played for years to come.'

By channeling traditional melody and writing from a place grounded in whakapapa, Te Kaahu has tapped into a timeless vein, one rich with possibility. Themes of healing and peace abide throughout and, frankly, it's hard not to get caught up in the wholesomeness of it all. Te Kaahu has redefined herself and, by acknowledging her past, has unearthed a new future. - Alex Behan, Stuff

Amidst the landslide of local albums released in the current New Zealand Music Month, a few immediately stand out, among them this collection entirely in te reo by Te Kaahu which is helmed by Theia (Waikato-Tainui, Ngaati Tiipaa). The messages here are of peace, hurt and reconciliation, and optimism as we enter a new era where te reo and Maori sovereignty are no longer a debating point but a reality. Produced by Jol Mulholland at The Lab - with Theia co-producing some of the songs - this album is slated to come out on vinyl later in the year and that will be something to possess. Not just for the music but the gorgeous, framable cover. - Graham Reid, The Listener

Te Kaahu is the powerful new project of Em Walker (Waikato-Tainui, Ngāti Tāpa), who also moonlights as alternative pop act Theia. Written and sung entirely in te reo Māori, each waiata is clearly, lovingly and carefully crafted, with Walker explaining that for this set of songs she had a strong focus on the art of storytelling, and says she wanted to pay tribute to her tūpuna wāhine (female ancestors). Musically, these harmony-drenched songs sway effortlessly from sparse and spine-tingling balladry to vintage-sounding numbers that evoke torch songs of the 1950s and 60s, all coming together to form one very special album indeed. - Matthew Crawley, Viva

…a meticulous package of gorgeous song-craft that has the feeling of something made with the greatest care - every word, image and sound the product of deep thought from its writer, designed as an immersion into te ao Māori. - Tony Stamp, RNZ