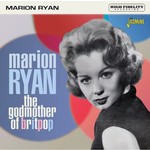 Marion Ryan
The Godmother of Britpop

Once described as "The Marilyn Monroe of popular song", the diminutive MARION RYAN (she stood just 5' tall) emerged from Ray Ellington's band to establish herself as one of the most popular female singers of the 50s.

Commercial television was new to the UK at that time and Marion was among the first of a new generation of entertainers who established themselves first and foremost as TV stars.

She recorded for Pye Records in the 50s, before switching to EMI's Columbia label in 1960. This compilation presents the "Very Best" of her output between 1954-62, starting off with her first ever appearance on record, with Ray Ellington.

Included are her hits and well known numbers, like 'Love Me Forever', 'Uh Oh, I'm Falling In Love Again', 'Stairway Of Love', 'Sixteen Reasons' and 'It's You That I Love'. This is the first time Marion's recorded output has been thus anthologised.