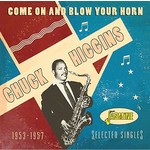 A seminal influence on a young Frank Zappa and his various Mothers, and a powerful live performer to boot, saxblaster CHUCK HIGGINS was one of the most popular attractions of the West Coast's mid 50s early R&R scene.

He recorded prolifically, for a many different record labels; this compilation presents a "selected anthology" of Chuck's singles' releases between 1953 and 1957.

Although his records never quite achieved national chart action, many of these sides were jukebox successes in Los Angeles and along the West Coast. His brother, Fred Higgins, is featured as vocalist on several of these sides, under his pseudonym of "Daddy Cleanhead" (check out 'Broke' b/w 'I'll Be There').