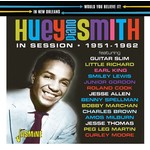 Part of Jasmine's ongoing and popular "In Session" series this new set can also be seen as the companion to an earlier Jasmine release, Don't You Just Know It, The Very Best Of Huey "Piano" Smith & The Clowns 1956-62 (JASMCD
3059), this set concentrates on Huey's work as a session player.

Long before recording under his own name, he backed artists like Eddie "Guitar Slim" Jones (check out 'Standin' At The Station'), Little Richard ('Tutti-Frutti'), Earl King ('Those Lonely, Lonely Nights') and Smiley Lewis ('I Hear You Knocking').