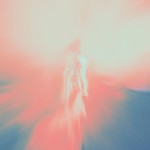 The Brooklyn-based DJ, producer and singer's music features the evolution of her experimental New York house sounds along with a blend of spoken word between English and Korean.

The EPs are produced by both Yaeji and Godmode label founder Nick Sylvester.