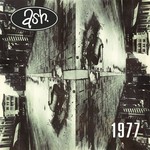 The spectacular debut release from Ash, 1977 was a monumental album in the brit-rock scene, reaching No.1 in the UK (it has since become a platinum record). The Northern Irish band smashed out the huge singles 'Girl From Mars', 'Kung Fu', 'Goldfinger', 'Angel Interceptor' and 'Oh Yeah' on the album.

This reissue is pressed on black and white splatter vinyl. It hasn't been reissued since it's 1996 release.