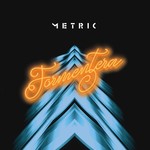 $26.00 In stock with supplier
ETA: 2-5 business days add to cart more by this artist

After an almost 25 year history, Metric reigns as an iconic, beloved and critically acclaimed indie rock band, staying true to their roots while at the same time breaking through to the mainstream. Their 2022 album Formentera is the follow-up to 2018's Art of Doubt.

Even real places become imaginary when they are so far out of reach. Named for an idyllic island near Ibiza off the coast of Spain, Formentera is a place that, for Metric, only existed on a page in a "dream destinations" travel book that lay open on a desk in the new recording studio that guitarist Jimmy Shaw built in a rural hamlet north of Toronto. This is the setting where the band's eighth album took shape.

Metric's sound is both genre-defying and genre-defining. Emily Haines, Jimmy Shaw, bassist Joshua Winstead and drummer Joules Scott Key started playing together in NYC in 2001. They are just getting started.

1. Doomscroller
2. All Comes Crashing
3. What Feels Like Eternity
4. Formentera
5. Enemies of the Ocean
6. I Will Never Settle
7. False Dichotomy
8. Oh Please
9. Paths in the Sky