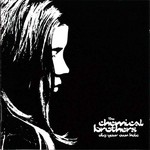 The Chemical Brothers
Dig Your Own Hole

"The Chemical Brothers - Tom Rowlands and Ed Simons - have sold over 8 million albums since bursting out of the UK's underground club scene in the mid-'90s. They have had a rapid ascent, from scrawny Heavenly Social club DJs to scrawny internationally renowned, jet-setting DJs.

This fearless duo brought us titanic break-beats, psychedelic techno, kamikaze mind benders and pastoral chill-out lullabies, practically creating their own industry, with many pretenders to their much-hallowed throne.

Their 1970s-era vinyl furnace infused the celebrated 1995 Chemical Brothers debut album, 'Exit Planet Dust' - a groundbreaking, highly acclaimed recording, which includes the memorable singles "Leave Home" and "Chemical Beats". With 'Dig Your Own Hole' The Chemical Brothers continued and expanded on this break-beat blueprint with all manner of screaming sound effects atop super-funk rhythms and riffs.

When initially let loose in 1997, 'Dig Your Own Hole' entered straight into the top 20 of the American Billboard chart, and rightly so - The Chemical Brothers' particular blend of dance & hip-hop meets psychedelic rock culminate to almost incendiary levels on its 11-track, cylindrical surface. The Brothers played and produced most of the music on 'Dig Your Own Hole' by themselves, along with engineers Steve Dub, Tim Holmes and Jon Dee.

"Block Rockin' Beats" is the ideal opener - a torrent of sound which transmogrifies into a big beat colossus that has become the benchmark single for an entire generation. Notably, the video for "Block Rockin' Beats" won a Grammy Award. The title track and wicked "Elektrobank" (which includes the mighty Kool Herc and an awesome Keith Murray sample) are more extreme still, approaching maximum dance-floor pulse and featuring some of the most full-on special effects known to man - true aural delights.

"Setting Sun" is Oasis' guitarist / geezer Noel Gallagher's catchy contribution - which turns into a bizarre Beatles tribute with "Tomorrow Never Knows" being given the Chemical's treatment. The lovely Beth Orton also makes a guest appearance on her adorable "Where Do I Begin?" - a remarkably inventive take on the future of folk, colliding as it does with the Chemical's electronica.

As mentioned above, this dramatic sophomore album boasts an array of intriguing sound bytes and loops, augmented by devastating grooves, and the kind of loud, rollicking basslines that wouldn't sound amiss on a Red Hot Chili Peppers CD. It also includes a revamped mix of "Get Up On It Like This", plus (last and certainly not least) the mind-boggling finale that is "Private Psychedelic Reel" - an utterly breathtaking piece of music that almost defies description! Their 20+ minute rendition of it at The Big Out 2005 was particularly inspiring.

Throughout their career Tom and Ed have demonstrated that when it comes to supreme beat-based innovation, inspired collaboration and sheer sonic excellence, they are matchless. And, they are now the most respected Godfathers of big beat, pushing not just their core sound, but 21st century electronic music to the next level.

Over the last seven years that have followed the release of 'Dig Your Own Hole', The Chemical Brothers have gone on to hone their style of funky-electro-pop further still, via a number of other successful and critically acclaimed masterworks. These include the brilliant 'Surrender' (1999), 'Come With Us' (2002 - not quite as top-notch as the others, but still amazing) and of course, 'Push the Button' (2005 - a work of genius!). However, it is 'Dig Your Own Hole' that holds up best to repeated listening and continues to be their most memorable release thus far - 'tis superb!"
-MARTY & GEOFF

The Fat of the Land
more suggestions…