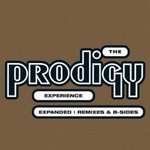 Featuring all of their Top 5 singles released to that point, plus an extra disc of rare tracks, mixes and live versions - this edition of 'Experience' offers the definitive version of the rave era's greatest album.

Few artists or bands manage to release epoch-defining albums, and even fewer manage two… Welcome (back) to The Prodigy then, with this essential, era-defining debut album - a perfect summary of their time, and a signpost to a brave new future.

Let's set the scene: It's Britain 1992. The rave scene was spectacular, even turbo-driven. Huge events drew like-minded souls with the promise of hedonistic pleasure gained from a heady mix of good pills & dancing to pounding, furious breaks-driven hardcore. And The Prodigy were there, sound tracking the battles, scoring the victories and capturing the all round joi de vivre with their brilliantly energised singles - and unleashing their first album, 'Experience'. Liam Howlett & co. succeeded in combining the energy of the rave with stunning + timeless production depths.

'Experience' featured versions of all of their Top 5 singles released to that point, alongside other live favourites, and entered the charts at #12 - selling over 200,000 copies over the following weeks.

This expanded edition of 'Experience' features an extra disc of rare tracks, mixes and live versions (including "Android" from The Prodigy's first single, originally from the demo Liam Howlett sent XL Recordings), offering the definitive version of the rave era's greatest album.

Dig Your Own Hole