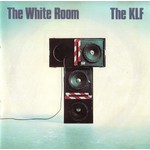 Their unforgettable "acid-house" masterpiece from 1991, this imported edition of 'The White Room' features a second disc of cool, bonus cuts too - lovely stuff!

"During the '80s & early '90s James Cauty + William Drummond produced a number of now mostly unavailable recordings under such guises as The Jams, The Time Lords, and others besides.

They eventually settled on calling themselves Kopyright Liberation Front (The KLF for short), and it was under this moniker that they issued what became their biggest and most memorable achievement with 'The White Room' (1991). Still sounding rather splendid even today, this CD is full of dance-driven "pop" tunes like "What Time is Love?"; the incredible "3AM Eternal"; "Last Train to Trancentral"; the title track; and of course the closing number, "Justified and Ancient". This album was critically acclaimed by nearly everyone at the time of its original materialization, and proved to be one of the most significant releases during the early rave scene in England.

The KLF were also renown for their mischievous pranks, which included one episode where they set fire to one million pounds in a field somewhere in the British countryside. Sadly, these jovial chaps retired before the mid '90s, announcing that they would only ever release another recording as "The KLF" when world peace had been declared - hearty characters for sure.

Anyway, if you've never enjoyed the heavenly grooves of this truly classic "acid-house" album, feel free to do so now... This imported edition features a second disc of cool, bonus cuts too - lovely stuff!"
-MARTY (28/08/2007)

Beat Dis: The Very Best Of