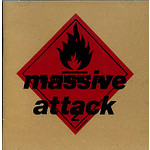 Originally released in 1991, 'Blue Lines' was a pioneering debut that characterized the blueprint for what became known as the "trip-hop" movement.

"Originally released in 1991, 'Blue Lines' was a pioneering debut that characterized the blueprint for what became known as the "trip-hop" movement.

The Bristol based, Massive Attack were formed in 1987 from the ashes of the British sound system / DJ collective, The Wild Bunch, who were renowned for their flawless assimilation of a wide range of musical styles. Massive Attack based themselves around two core members in "Mushroom" Vowles and "Daddy G" Marshall, who then recruited Bristol graffiti artist 3D (born Robert Del Naja). Together they skillfully gleaned aspects of American hip-hop and intertwined it with a cinematic synthesis of British club sounds - dub, soul, reggae and choice samples.

Their initial recording results were concentrated into the stunning nine tracks of deep dub-beats and soulful vibes that comprise 'Blue Lines', the group's first full-length release. Whilst not an enormous instant success commercially, it was highly regarded by the press, heralded by fans and went on to become a revered classic.

Various vocalists are featured throughout the album, yet it maintains its sense of consistency with innovative use of electronic sounds, fat vibrating basslines, and sensual touches of piano and violin. Nellee Hooper from Soul II Soul (also previously with the Wild Bunch), features extensively on the album, as does sultry singer Shara Nelson, and also Tricky, who provides suitable raps and attitude. Both Shara and Tricky were later to go on to have respected solo careers - check out Tricky's 'Maxinquaye', (a previous entry in our 'Classic Album of the Week' feature). The reggae legend Horace Andy is also onboard and sings beautifully on the wistfully cool 'One Love'.

The sublime opening cut "Safe From Harm" has diva Shara supplying haunting vocals amidst the dark and tense sounds - many (including the killer bass line) sampled from Billy Cobham's jazz fusion masterpiece, 'Spectrum' (actually, that's also on our CAOTW list). On this track alone, there is plenty to capture the listener's attention immediately. Shara also guests on "Lately", "Daydreaming", and "Unfinished Sympathy". The latter track is a truly masterful, beat-driven orchestral arrangement and was voted as "The Best Song of the Century" by BBC listeners.

It was soon after the release of this album that Shara left the group… Other dramatic changes included the band puzzlingly altering their name to simply "Massive" to avoid any allegation of support for the U.N.'s policy towards Iraq. They then attempted an ill-fated tour of North America, which saw most people write them off as being finished. All was not lost however, and after a 3-year hiatus they restored their name in full and unleashed their divisive sophomore release 'Protection'.

There's no doubt that 'Blue Lines' set the standard for the UK's electronica scene throughout the '90s and beyond, paving the way for such acclaimed artists as Portishead, Sneaker Pimps, Beth Orton, and many more. With it's exceptionally good production and alienated grooves 'Blue Lines' is an experience second to none and it is still rightfully regarded as one of the best downbeat albums of all time."
-GEOFF & MARTY