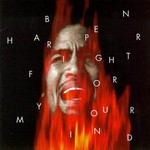 Ben Harper
Fight for Your Mind

'Fight for Your Mind' is a mighty fine work from the much loved and unique singer / guitarist / songwriter, Ben Harper.

"Blending the grooves of funk, soul, reggae and folk into a unique style, singer / guitarist / songwriter Ben Harper has grown in popularity from a cult following in the '90s to worldwide success.

Influenced by such artists as Jimi Hendrix, Cat Stevens and the two Bobs (Dylan and Marley), Harper began writing his own songs and developed his talents to become a brilliant 'Weissenborn' slide guitar player. This has become his trademark sound, and to see or hear him play this instrument is a remarkable experience.

New Zealand in particular has taken Ben to heart and he has visited these shores many times, playing to sold out venues throughout the country. And touring has always been a top priority for him. Living in California, he began his live work in the '80s, playing the L.A. club circuit before landing a contract with Virgin in 1992. His debut album, 'Welcome to the Cruel World' finally got released in 1994 and it received well-deserved praise.

The following year he issued his sophomore album, 'Fight for Your Mind', which is considered his strongest recording. He had developed his musicianship and songwriting skills to a peak, while his new band added zest to his folk / rock sound. The lyrics are most poetic (and, at times, political) and the whole album has an irresistible positive feel to it.

The highlights are many; from the subtle "Excuse Me Mr." and "Gold to Me" through to the stunning "God Fearing Man", which captures some of the power that Harper creates in concert. The title track rocks along beautifully while "Burn One Down" is a catchy ode to the herb. The single "Ground on Down" was most successful and paved the way for Ben's golden future.

Ben Harper hasn't released a weak album yet, so all of them are worth getting. But, when push comes to shove, 'Fight For Your Mind' is a mighty fine place to start - and keep going back to!"
- GEOFF

Songs in the Key of Life (2CD)

Flight of the Conchords
more suggestions…