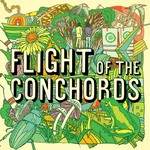 Flight of the Conchords followed the release of their six-track Grammy Award-nominated Grammy Award-winning (it's true!) CD EP The Distant Future with this, their full-length record album debut.

Fight for Your Mind