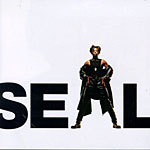 Seal's hugely successful self-titled album was originally debuted to wide acclaim during 1991. It is a fantastic recording that has the ability to appeal to practically everyone.

The legendary Trevor Horn produced it, himself previously a member of 2 rather successful groups, namely The Buggles ("Video Killed the Radio Star") and of course, Yes ('Drama'). Along with 6 engineers & 2 assistants he managed to harness Seal's beautiful voice & inspirational songs - unifying them with a resonance that captured the feel of the burgeoning U.K. dance scene of the time. The resultant 'Seal' contained no less than 4 phenomenal hit singles: "The Beginning", "Crazy", "Killer", and "Future Love Paradise".

The album opens with "The Beginning", featuring a driving dance beat, melodious keyboards and a thrifty acoustic guitar that segue perfectly into the serenity of the track 2, "Deep Water". The beautiful intro to this second song contains lush slide work plus touching, multi-layered vocal harmonies. After these building atmospherics the tune drops into a swirling mass of strings before the main theme kicks in with a strong groove from Doug's Spector bass. All up, "Deep Water" is a superb composition that bellies many similar themes that appear in the pieces that follow.

Perhaps the most well know tune from this album, "Crazy" materializes next with a funky 4/4 beat that anchors the proceedings perfectly, allowing Seal's vocals to take the helm and soar majestically above the dreamy backing track. The breakdown section in the middle of the song & subsequent refrain are stunning and make for a truly memorable "pop" anthem, complete with perceptive lyrics.

Seal originally performed the fourth track "Killer" with the artist known as Adamski before making it his own. Amazingly, it received a third lease of life some years later when it was successfully covered by superstar George Michael. After another brief but atmospheric introduction sequence, one of the most killer (pun intended) basslines of all time kicks in to begin the tune proper. Once again, the strong yet simplistic beats harness a relatively straightforward song and turn it into something much greater than the sum of its parts.

That leaves us with the last 3 songs from this adept recording e.g. the striking "Wild", "Show Me", and the stirring "Violet". This trilogy of pieces are breathtaking in their own right, with "Show Me" being a supplication to a loved one for guidance, redemption, and ultimately happiness - a theme that reoccurs often during the 50 Minutes + 27 seconds that make up this CD.

'Seal' is a fantastic album that has the ability to appeal to practically everyone. Fans of great songs; D.I.Y. studio buffs; aspiring musicians; and possibly anyone who grew up in the late '80s and early '90s will reap much musical enjoyment from this brilliant recording… A real classic!"
-MARTY (28/08/2007)