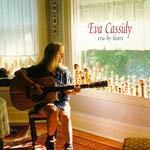 "Eva had that all-important quality, magic, alive forever on this album."
Mick Fleetwood

"Eva had that all important quality - magic. It is that magic that is still alive forever on this album."
Mick Fleetwood

In 1996 the Washington Area Music Association honoured her as 'Best Female Vocalist' in blues, jazz-contemporary, jazz-traditional and roots rock / traditional R&B categories, as well as 'Artist of the Year', and her release for 1996, 'Live At Blues Alley', as 'Album of the Year'.