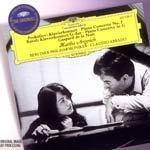 "all done with the most engaging reckless abandon." (Gramophone)

"There have been others to match the bustle and brilliance of Argerich's Prokofiev, her coloristic range, her drive, her flashiness, her straining at the leash. But I'm not sure I could name anyone who has so satisfyingly combined all those qualities, who has given us such a rocket-launched recapitulation in the first movement, such circus-routine vividness in the following variations (Prokofiev grew up in a Russia where 'circusization of the arts' was one of the 'in' concepts), or such monstrous, hyperbolic fairy-tale imagery in the finale, and all done with the most engaging reckless abandon.

The Ravel Concerto is another bundle of energy. I had forgotten how miraculous is the blend and interplay of piano and orchestra, and how ecstatically Argerich weaves around the cor anglais restatement in the slow movement.

Embarras de richesses indeed, now that DG have added Argerich's Gaspard to the original LP coupling. Here is a version of Ravel's devilish triptych which is unusually faithful to his subdued dynamic markings, quite apart from its breathtaking agility. The results ring poetically true at the same time as defying criticism in pianistic terms."
Gramophone