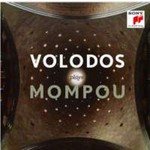 Arcadi Volodos is one of the world's best pianists, celebrated as a "genius" and the "new Horowitz" for the unique combination of outstanding virtuosity and profound and expressive musicality.

The fact that Mompou's music is hardly known is a key to success for this CD. It can only reveal its deep und unique quality in the magnificent interpretation of Volodos.

The music of Catalonian composer Federico Mompou (1893-1987) is almost completely unknown today. Unjustly so, in the opinion of Russian star pianist Arcadi Volodos, who has devoted his new solo CD to this remarkable musical personality.

Carrying on the tradition established by his Spanish colleagues Enrique Granados and Isaac Albéniz, Mompou's works are subtle and delicate, mysterious and intimate, with a shimmering Impressionist palette. Mompou's role models are always in evidence in his many piano pieces: Chopin and Scriabin, Satie and Debussy. Yet in quiet, unobtrusive fashion, Mompou evolves a musical cosmos entirely his own from these models: his music is a true discovery.

Volodos has chosen for this CD pieces from the Mompou cycles Scènes d´Enfants (1915-18), Charmes (1920/21) and Música Callada (1959-67), which were among the composer's own favourites. In the last few years, Arcadi Volodos has regularly played works by the Catalonian composer in his recitals, prompting the Süddeutsche Zeitung to refer to his "deep sensitivity for inspired nuance".

"you will rarely if ever hear Mompou's introspection caught and held with greater affection and finesse...his playing is of an unfaltering poise and translucency. Sony's sound is ideal. This is a disc in a million." (Gramophone Aug 2013)

"Arcadi Volodos, showman virtuoso, playing the music of Federico Mompou, poetic loner? The match could hardly be more surprising - or successful...there's no doubting the artist's sincere affection and affinity for this music...This new disc only confirms the genius of Volodos" (MusicWeb Aug 2013)