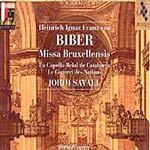 "The performance here, superlatively recorded in the the echoeing, but never blurring, acoustics of Salzburg Cathedral, re-creates the work's premiere, and is truly inspired. This marvellous disc cannot be too highly recommended."
- Rosette. Penguin Stereo Guide.

"Modern technology and expert engineering allow us to bask in Biber's magnificent-sounding and spaciously conceived masses, complete with all the glistening attention to detail, the visceral tutti impact and the delicate textural contrasts which constitute some of baroque music's most opulent expressions of earthly potency. Salzburg Cathedral provided exceptional acoustical possibilities.
A world premiere recording of a monumental work by a major composer is not to be sniffed at, especially when directed by Jordi Savall, who has the knack of casting fresh light on any musical mosaic that catches his fancy (such has been the case in many discs from his kaleidoscopic and beautifully produced Alia Vox series). Savall lets Biber's score roll out unassumingly; even if at the expense of fine tuning and exacting ensemble (hear the unison start of the Sanctus for leeway!), the final sections of the Credo are immensely stylish, and the 'Miserere' from the Gloria has the dignity of a spontaneous event rather than a contrived vignette.
This will delight collectors who relish these fortress-like recordings. Not all batteries of trumpets on the right flank and echoes of shot in the rafters, but there's a good deal of it - possibly because the works may have been written in 1701 to mark the foundation of the Order of the Knights of St Rupert, an aristocratic military elite."
Gramophone Magazine

Jordi Savall, born in Barcelona in 1941, started his musical studies when he was 6. After finishing his musical studies as a cellist at the Barcelona Conservatory, he specialized in the study of Early Music and in the Viola da Gamba. His teachers included Wieland Kuijken in Brussels and August Wenziger at the Schola Cantorum Basiliensis in Basel, where in 1970 he obtained his diploma as soloist and professor, and in 1973 succeeded his teacher Wenziger.
In 1970, he becomes well known after recording several masterpieces of the viol repertoire.