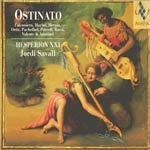 Jordi Savall (b.1941) is a viol player & conductor from Catalunya. He has been one of the major figures in Early Music since the 1970s, and has been a major exponent of solo viola da gamba performance as well as various innovative approaches to ensemble. His repertory ranges from the medieval era to the French baroque and beyond.

The Teares of the Muses 1599 - Elizabethan Consort Music Vol. 2