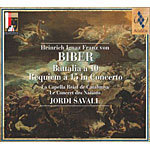 World premiere of the Requiem at Salzburg Cathedral

Heinrich Ignaz Franz von Biber (1644-1704), the Bohemian-born violinist and composer, was one of the most influential composers of the 17th century. After arriving in Salzburg in 1670, Biber entered the service of the music-loving Austrian emperor, Leopold 1. In 1670 Biber was appointed deputy-kapellmeister at the Court of Salzburg, becoming kapelllmeister in 1884/ His fame as a violinist spread rapidly throughout Europe and his compositions, particularly his numerous violin sonatas, his two operas and his sacred music, earn him a place among the founders of the German violin school. He ended his days at the Court of Munich.