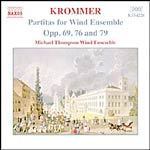 Franz Krommer was born Frantisek Vincenc Kramár in Kamenice, Bohemia, in 1759. He studied the organ and violin with his uncle and then, after a brief period in Vienna, moved to the south of Budapest in 1786 to take up a post as violinist in the Duke of Styrum's orchestra in Simontornya. Four years later he became Kapellmeister at Pécs Cathedral but in 1795 he returned to Vienna where he developed a reputation as an excellent violinist and impressed Pavel Vranicky with his "great dexterity" on the oboe, fortepiano and Hungarian cimbalom. By now, however, Krommer was also turning his attention to composition, and after the publication of his string quartets, Opus 1, in 1793 wrote a large amount of music including concertos, symphonies and Masses. Schubert is said to have felt that the symphonies were less good than those by Kozeluch, but in 1813 Ernst Ludwig Gerber compared Krommer's string quartets favourably with Haydn's and wrote in particularly fulsome terms about their "wealth of fertile ideas, wit and fire."

Today, however, Krommer is best known for his partitas or Harmonie for pairs of oboes, clarinets, horns and bassoons, and contrabasson. The first three of these, Opus 45, were published in 1803 by the Viennese Bureau des Arts et d'Industrie but a further ten were printed over the next seven years by Alois Senefelder's Chemische Druckerey, and many others remain in manuscript today. At the time, Krommer may have been drawn to Senefelder's revolutionary new printing process, lithography, but later he recognised the benefits of exploiting the Parisian market for all thirteen of the previously published compositions were printed in a new edition by Dufaut et Dubois in Paris in 1826. Individual works were also made available by other Viennese publishers, but by the end of the 1830s the interest in Harmoniemusik, original and transcribed work for wind ensemble, had waned, and in common with thousands of other works Krommer's partitas were consigned to history.

Krommer's motivation in writing the Harmonie is unclear. They may have been composed for the Emperor's own wind band, which included the requisite contrabassoon, but as Krommer is thought to have had many of them played through and the parts corrected at an early stage, he may have intended them for sale. The autograph manuscript of one of the published partitas somehow reached the Bibliothèque Nationale in Paris, where it survives today, and it is possible that Krommer took it with him to the city as an example of his work when he visited in 1815. If so, it seems to have had an effect, for in the same year Antoine Reicha, the doyen of French wind music, was among those who supported Krommer's election as an honorary member of the Paris Conservatoire.

Senefelder advertised the earliest of the works on this recording, Opus 69 in E flat, in the Wiener Zeitung on 14th May 1808 and followed it the next year with Opus 76 in C major. Like Opus 79 in E flat, which was published on 30th May 1810, these works have an opulence and resonance which was characteristic of the grander wind bands of the day and derives largely from Krommer's decision to reinforce the bass line with a contrabassoon. Such idiomatic scoring is also evident elsewhere: in the C major partita Opus 76, for example, the lines for clarinets pitched in C make a feature of the instruments' special, slightly piercing tone, and Opus 69 features in the second horn part the arpeggios, wide leaps and flowing middle register melodies which were the trademark of 'second horn' players at the time and which contrasted with the high, brilliant runs which characterized the skill of 'first horn' players. In view of such careful writing there has to be some doubt about the legitimacy of the alternative instrumentations offered in the French editions of the partitas, where purchasers are offered the possibility of using flutes or clarinets pitched in C as alternatives to the oboes, and a serpent or trombone instead of the contrabassoon.

Structurally, all three works are characteristic of their time but yet allow Krommer's personal touches to shine through. Each begins with a movement in sonata form, but Opus 79 demonstrates the composer's musical wit by opening with a series of perfect cadences which suggest the end, rather than the beginning, of a work. Opus 76 is unusual in opening with a motif which we never hear again, but as this is similar to the last melodic phrase in The Magic Flute this may be a deft tribute to Mozart. Krommer's slow movements are often darkly scored, hinting at a profundity rarely found in wind music unless it is by Mozart, but allowing individual players to shine in a manner which recalls the solo lines in early nineteenth-century opera. By contrast, the minuets are sturdy and folk-like and, in their use of hemiolas, seem to presage the music of Dvorák some seventy years later. The trios of Opus 69 and Opus 76 are similarly bucolic, but the same section in Opus 79 is so spacious that it could almost be mistaken for Schubert. The so-called "rondos" which conclude Opus 69 and Opus 76 are in fact a polka and a movement in sonata form, but like the closing movement of Opus 79 they share the high spirits, the irrepressible drive and the sheer energy which are unmistakeable features of Krommer's style.
John Humphries

"Superb playing is required in every movement of these works, and the Michael Thompson Wind Quintet players are up to the task." Classics Today review of the ensemble's recording of the quintets of Reicha on Naxos.

The Michael Thompson Wind Quintet came into existence in 1992, when Barry Tuckwell announced he was leaving the Quintet that had previously carried his name.