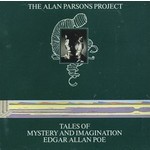 An extremely mesmerizing aural journey through Poe's most renowned works. Everything a "concept album" fan could want!

"Originally released in 1976, 'Tales of Mystery and Imagination - Edgar Allan Poe' was the first LP by the esteemed engineer / producer / musician, Alan Parsons. Prior to this, he had been involved in such masterpieces as The Beatles' 'Abbey Road' and Pink Floyd's 'The Dark Side of the Moon'. Alan also contributed significantly to recordings by Paul McCartney's Wings, Al Stewart, and Cockney Rebel.

Alan teamed up with songwriter, Eric Woolfson in 1975 and formed The Alan Parsons Project, which subsequently provided a vehicle for their creative musical endeavours. Although Alan certainly played & sang throughout the many albums that they went on to record, his role was more as a guiding director & producer. This allowed the line-up for "The Project" to vary over the years, Alan & Eric picking the cream of musicians available at the time, including: Arthur Brown, John Miles, B. J. Cole, Ian Bairnson, and a host of others.

Highlights include "The Raven" (featuring the Westminster City School Boys Choir), the hook laden "(The System of) Doctor Tarr and Professor Feather", plus of course the incredibly powerful suite, "Fall of the House of Usher".

Although this recording is now well over a quarter of a century old, it still sounds great today - and is undoubtedly one of The Alan Parsons Project's best. From this stunning debut, they went on to release many other astounding works, such as 'I Robot' (1977), 'Turn of a Friendly Card' (1980), their most commercially successful effort, 'Eye in the Sky' (1982), and the wonderful 'Stereotomy' (1985).

'Tales of Mystery and Imagination - Edgar Allan Poe' remains an extremely mesmerizing aural journey through some of author Edgar Allan Poe's most renowned works. It is a highly recommended listening experience that is everything a "concept album" fan could ever want!"
-GEOFF & MARTY

1. A Dream Within a Dream (Instrumental)
2. The Raven
3. The Tell-Tale Heart
4. The Cask of Amontillado
5. (The System of) Doctor Tarr and Professor Feather